We all knew it’s a matter of time: Google is working on introducing changes to its terms that’ll allow certain entities to run coronavirus ads on its global online ad network.

The exception will initially apply to hospitals, with plans to extend it to political institutions too, Reuters[1] reports. Medical providers and non-governmental organizations are also expected to get a pass to push coronavirus ads. The new rules are slated to be revealed over the coming days.

[Read: YouTube throttles video quality in Europe due to coronavirus[2]]

“Currently we do not allow such ads to run under our Sensitive Events policy, which is designed to protect users by blocking ads that try to capitalize on short-term events like natural disasters,” read the memo sent by Google’s head of industry for elections, Mark Beatty, and first reported by Axios[3].

“However, coronavirus has become an ongoing and important part of everyday conversation, including a relevant topic in political discourse and for many advertisers in different sectors,” the memo further said.

Much like with its efforts to shift priority to authoritative sources[4] across platforms, it seems the Big G aims to limit coronavirus ads only to a small number of companies it deems trustworthy. While that might seem all fine and dandy, authoritative sources can spread misinformation, too, as TechDirt[5] has shown.

Who cares, though? There’s money to be made. Right?

Read next: How my first digital date helped me survive self-isolation [6]

Read our daily coverage[7] on how the tech industry is responding to the coronavirus and subscribe to our weekly newsletter Coronavirus in Context[8].

For tips and tricks on working remotely, check out our Growth Quarters articles here[9] or follow us on Twitter[10].

Related images and videos for Roses are red, violets are blue, Google wants that sweet coronavirus ad money too.

Roses are Red, April is Grey meme explained: What's the meaning behind the Justin Timberlake trend?

The meaning of the Roses are Red, April is Grey meme explained.

There is never a shortage of new memes[1] and trends on the internet.

Whether it's a new challenge, meme or viral video, there's always something new hitting our social media[2] timelines.

One of the latest memes to resurface online is being dubbed the 'Roses are Red, April is Grey' meme.

The meme features the two lines of poetry and is accompanied by a picture of Justin Timberlake[3].

For many, it's a hilarious meme that has appeared annually for the past few years but where does the Timberlake trend come from?

The Roses are Red, April is Grey meme

The Roses are Red meme is simple enough.

It features two lines of poetry which are a slight riff on the famous 'roses are red, violets are blue' poem.

This is then followed by a varying line of text that does tweak the meme slightly. The original line of text was 'in a few days' while new versions of the meme have tweaked this slightly.

And then, those lines are followed by a picture of Justin Timberlake, quite often with the text 'It's Gonna Be May[4]' included on the image.

Where does the meme come from?

The Roses are Red meme, which is also known by many as the 'It's Gonna Be May' meme, is a hilarious reference to an NSYNC song.

The NSYNC song in question is It's Gonna Be Me.

The reason why it's used in the meme is that throughout the song, the word 'me' is pronounced to sound like 'May.'

Recently, the It's Gonna Be May meme has been tweaked thanks to the outbreak of the COVID-19 coronavirus.

Thanks to self-isolation and quarantine laws around the world, many social media users have changed the meme so it relates to being in lockdown until May.

It just goes to show that when times get tough, people will always turn to humour to lighten the load.

Have something to tell us about this article?

Related news for Roses are Red, April is Grey meme explained: What's the meaning behind the Justin Timberlake trend?

Related images and videos for Roses are Red, April is Grey meme explained: What's the meaning behind the Justin Timberlake trend?.

As White House Tells States to ‘Do Your Part,’ Governors Ask What Trump Is Actually Doing 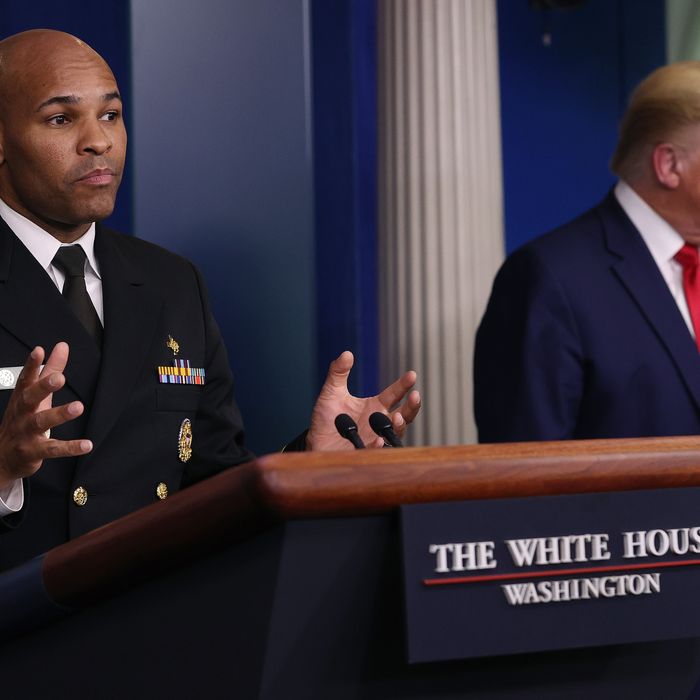 On February 1, Surgeon General Jerome Adams tweeted[2] out a poem: “Roses are red/violets are blue/Risk is low for #coronavirus/But high for the flu … So get your #flushot.” Aside from urging Americans to get the vaccine extremely late in the season, the federal government’s leading public-health spokesperson downplayed the risk of COVID-19 at a crucial, early stage, when serious action from the White House could have limited the outbreak. By April 5 — by which point over 9,000 Americans had died from the virus — he had dropped the cute approach. On Fox News Sunday, Adams told host Chris Wallace that “this is going to be the hardest and the saddest week of most Americans’ lives,” adding that “this is going to be our Pearl Harbor moment, our 9/11 moment, only it’s not going to be localized — it’s going to be happening all over the country.”

Together with another Sunday show comment, Adams caught the attention of state and local leaders, fueling the ongoing conflict[3] over resources between the Trump administration and the states. On Meet the Press, the surgeon general said that states have to “be Rosie the Riveter” and must “do your part.” But judging from the federal government’s failure to properly supply — while directly underbidding[4] states in contract negotiations — some governors weren’t encouraged by the surgeon general’s message.

While Governor John Bel Edwards responded on CNN’s State of the Union by informing the administration that Louisiana could exceed its ventilator capacity as early as Thursday, Washington State Governor Jay Inslee — who’s been lauded[5] for his coronavirus response and his state’s dampened outbreak — called Adams’s comment “ludicrous.” He added, “The surgeon general referred to Pearl Harbor. Can you imagine if Franklin Delano Roosevelt said, ‘We’ll be right behind you, Connecticut. Good luck building those battleships’?”

In another interview on State of the Union, Illinois Governor J.B. Pritzker called Trump’s response incompetent, saying that he “does not understand the word ‘federal,’” referring to the president’s instructions for states to seek out their own resources[6]. “If he were right, why would we ever need a Federal Emergency Management Agency?” Pritzker asked. “It’s because individual states can’t possibly do what the federal government can do. We don’t have a Defense Production Act[7]. There’s no way that we could stockpile in anticipation of a pandemic that no one anticipated. And yet the federal government is responsible for doing precisely that.”

The surgeon general’s “do your part” message may actually be sound advice, considering some of the resources that the federal government has sent to the states. On Thursday, the emergency management director of Montgomery County in Alabama said that 5,000 out of 5,880 masks sent from the Strategic National Stockpile were rotted[8]. They had expired a decade ago. According to the Associated Press[9], federal agencies failed to place bulk orders of N95 respirator masks, ventilators, and other critical resources until mid-March, well after it was clear that hospitals nationwide were desperately short of supplies to treat patients and protect medical providers. In New York, the president and his Jared-of-all-trades[10] have neglected calls for more ventilators, claiming to know better than the governor’s estimate; already, over 4,000 people have died in the state. Though Trump boasted of the importance of the USNS Comfort, which was sent to New York, the hospital ship has been described as “a joke”[11] by a top hospital executive, as it was almost entirely empty on Friday.

Not all states were created equal in the eyes of the current administration: While Illinois, Massachusetts, and New York haven’t received anywhere near the requested levels of aid, Florida quickly got all of what it asked for in its first two appeals. “The president knows Florida is so important for his reelection,” a White House official told[12] the Washington Post. “He pays close attention to what Florida wants.”

Daily news about the politics, business, and technology shaping our world.

Related news for As White House Tells States to ‘Do Your Part,’ Governors Ask What Trump Is Actually Doing

Related images and videos for As White House Tells States to ‘Do Your Part,’ Governors Ask What Trump Is Actually Doing.